Higher than kodiak, longer than 4 pools. Our conveyors are used by the largest distributor of newspapers in the Czech Republic

written: 19.07.2017
We have streamlined the workplace of the market leader in the distribution of printed periodicals. A belt conveyor up to 3.5 meters high and 210 meters long is removed in the Prague hall.

In PNS, belt conveyors sort newspapers, magazines and other goods

The first newspaper company (PNS) provides printed matter for 80% of the Czech market. It supplies newspapers, magazines and other assortment to more than 17,000 points of sale. They make sure that people can buy a newspaper at their favorite stall, but also that the remittance (unsold copies) is returned to the publisher.

They ship 16 prints per second. The requirements for their new sorting line for the Prague headquarters were really high. He had to work precisely. Even if it should be in operation non-stop.

They needed a reliable line, thanks to which they could quickly sort unsold titles, prepare them for removal and at the same time make the work easier for the operator. In addition, printed matter is a problematic material in many respects. Some have a slippery surface, others are accompanied by dust or tend to buy.

Instead of workers, we moved the conveyor belts

Previously, PNS employees worked for a static line. They sorted periodicals into baskets at individual workplaces and then took them into containers. Manipulating the print was very difficult. On the new line with automatic transport, the prints are now moved by belt conveyors into the prepared containers, completely without manual handling.

6 conveyors, 3 routes, 1 tailor-made line. We have already equipped the conveyors with 3 branches of the parent company, so we knew exactly which solution would be best for this type of workplace. Within 3 months of signing the contract, the new custom line was already fully operational. It can easily handle loads of up to 20 kg/m. It covers a width of approximately 45 meters and is 20 meters wide. It forms a total of 210 meters long transport route, which is complemented by 32 tables. It consists of several devices:

The backbone of the sorting line is a three-level belt conveyor. Newspapers run along the bottom, magazines run through the middle, and magazines with gift items are transported to the top. The conveyor belts are made of PVC and travel at speeds of up to 30 meters per minute.

Newspapers and magazines end up in separate container containers. In short containers, the distribution of printed matter is regulated by rotating or tilting overflows, the filling of long containers is adjusted by means of telescopic belt conveyors. Magazines with gift items continue to the oval, where the staff sorts and assembles them so that they can be returned to the publisher.

Retractable conveyors have sonar that measures the height of cut printed matter. The containers are thus filled evenly and the material is continuously moved. In addition, we have solved the problem of printing clumping at the overflow point, so that the route does not clog.

Are you interested in a similar solution? Contact us and we will prepare a tailor-made offer for you free of charge.

See what the new printed and remittance sorting line looks like, which supplies the densest network of points of sale in Europe 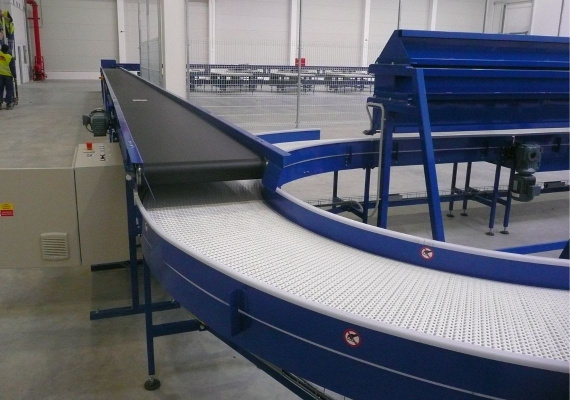 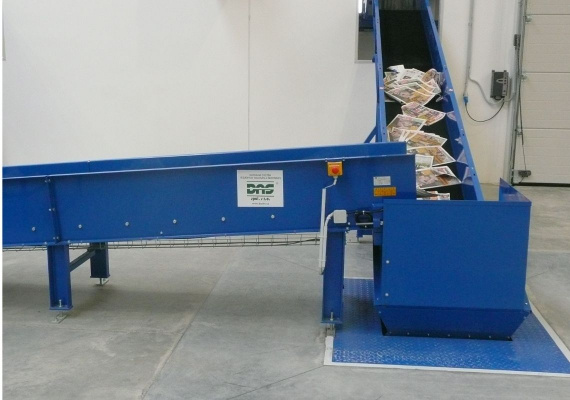 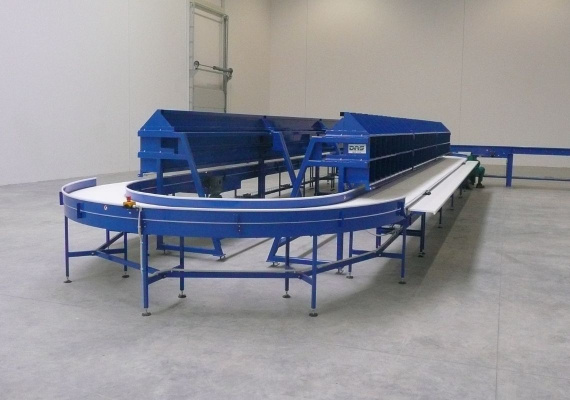 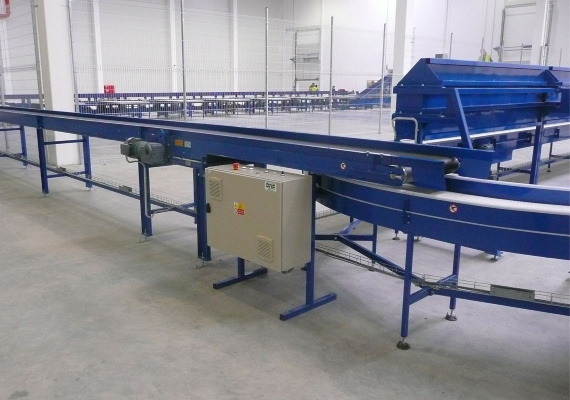 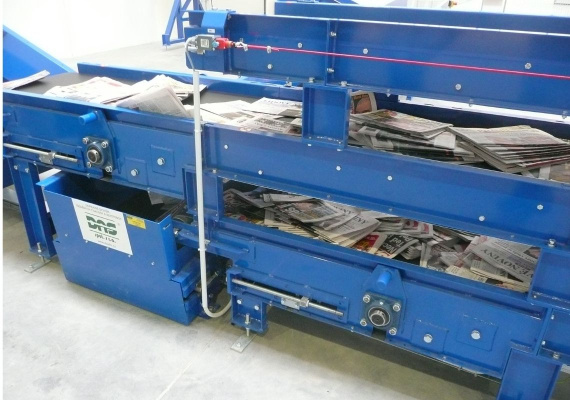 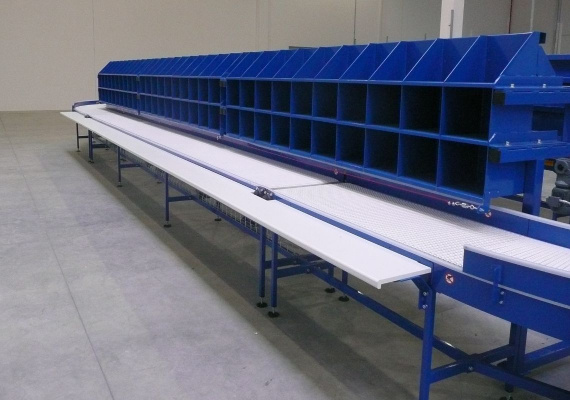 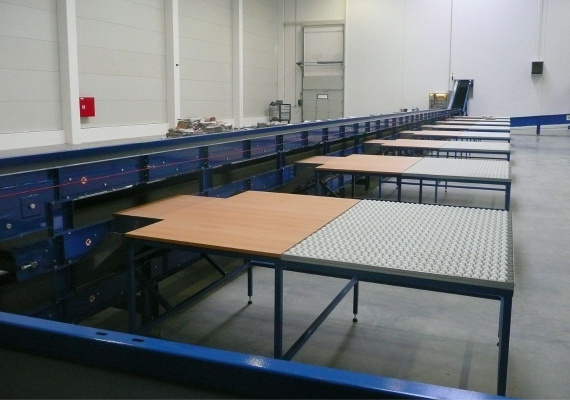 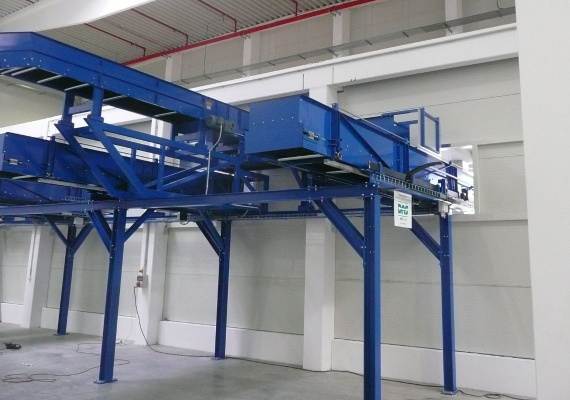 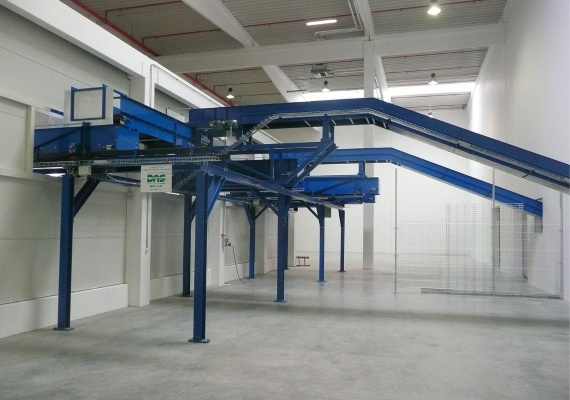 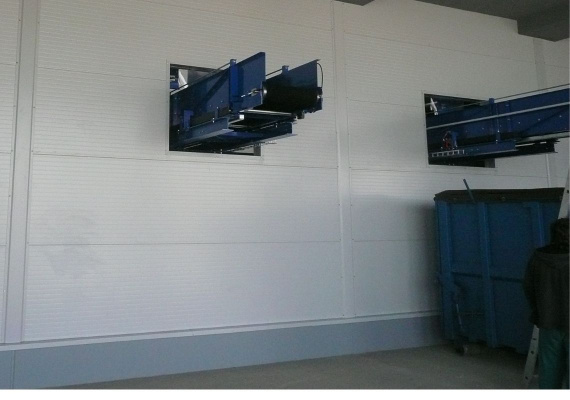 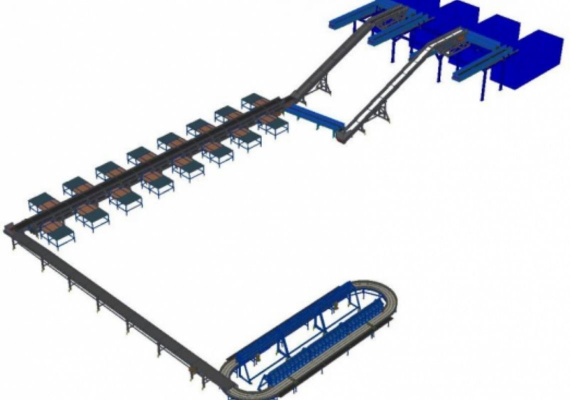 What we live in DAS

You know everything about us in 2 minutes. Play our video presentation

In less than two minutes, you will know everything essential - what it looks like with us, what we produce and what we will help you with. Check out our annual video.

100 million turnover and a woman in the lead. They wrote about us on Peak.cz

On April 1, 1993, we became the co-owners of a part of the former textile factory. But the start of our business was not an April. What happened next? Find out at Peak.cz.

We sponsor the purchase of social cars, we help seniors and the disabled. Read which charitable projects we are currently supporting.

Did we interest you? You will not pay anything for a request

Fill in the demand

The form was sent successfully